Bringing the Gorillas to New Zealand required Orana to develop an exhibit utilising a funding and construction model unlike any other at the park.  As a significant tourist attraction, Orana’s $6M Great Ape Centre was the most ambitious project ever undertaken by the park.

We were delighted to support Project Lead and Architect Ian Cumberpatch as a project sponsors/donor. Initially providing topographical surveying services for the enclosure site and then more minor subsequent supporting services.

At Fox and Associates, we believe every project offers the chance to do something unique or different. The Great Ape Centre project vision fit so well with our Company Vision to be part of a team ‘Creating Legacies with Land’. By supporting the Great Ape Centre, we could do our part to create a long-term legacy for our local community as well as the Gorilla population worldwide.

Our topographical survey allowed Ian to review all the site options and develop a design that would meet the needs of the park, gorillas and the public.

Fast-forward to today. The completed enclosure gives visitors ample obstruction-free viewing of the three male gorillas, Fataki, Fuzu and Mahali. They play an important advocacy role; creating awareness and educating visitors about the plight of Western Lowland Gorillas (find out how you can help here).

The Great Ape Centre attracts visitors from all over the world, as well as staff from Zoos worldwide keen to take key learnings from the project back to their own facilities.

We really enjoyed the partnerships built over this project, not just with the park but the other contractors involved. Everyone joined together as a community of like-minded businesses, getting fully behind the powerful vision of helping Orana become the first to bring Gorillas to New Zealand.

Recently we returned to Orana to fly our UAV (drone) over the whole 108ha site to produce a full site photo (resolution of 17mm), produce a topographical map and as well as undertaking a cadastral easement survey. A segment of the overall park photo showing the completed enclosure is featured above, with ground level photos of the enclosure below. 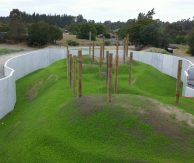 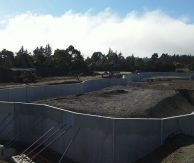 Key relationships in this project: