Fox in the field report by Alex Liggett 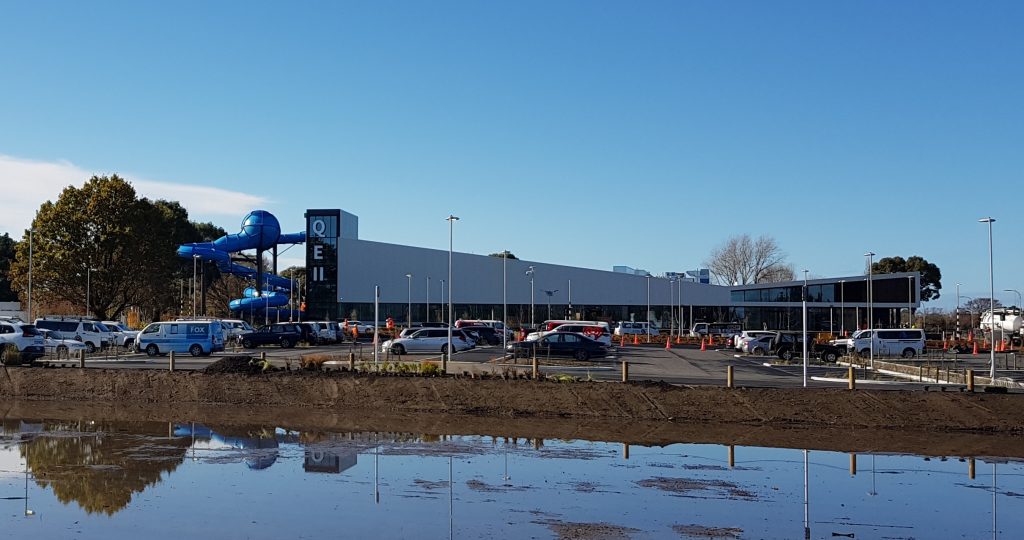 Taiora QEII Recreation and Sport Centre is a new facility on the site of the original QEII pools and stadium, which were built for the 1974 Commonwealth Games but were destroyed in the 2011 earthquake. The new centre includes a 25m competition pool with an innovative moveable floor, learn to swim, leisure, hydrotherapy, toddler and spa pools, a 130m long hydroslide and gym, café and meeting facilities.

Our involvement began in May 2016 with a topographic survey of the entire QEII park undertaken using the Fox UAV. The Ministry of Education, which acquired the southern part of the park for the new co-located Shirley Boys and Avonside Girls High Schools, commissioned a more detailed topographic survey. This in turn led into the provision of a legalisation survey to set land apart for the schools.

In January 2017, Apollo Projects engaged Fox & Associates for construction support surveys related to the new sport and recreation centre. We were involved with a wide variety of survey work on the site; from setting out gridlines and blockwork to the set-out of the pools, hydroslide, drainage and carpark kerb and channel. We also certified the competition pool and provided as-built drawings and a building location certificate to assist with building consent compliance.

From January 2017 until the facility opened in June 2018, the six staff involved with the project made more than 60 site visits in all kinds of weather and produced around 80 set-out diagrams, plans and drawings. In the meantime the legalisation of the school site was shepherded through a complex approval process to resolve the nearly 600mm of earthquake movement in the boundaries of the site.

Apollo Projects were initially uncertain that a small firm like Fox & Associates would be able to provide the necessary support. However, this concern proved to be unfounded, and we impressed with our ability to respond at the last minute when required. In the words of one project manager “You guys are a pleasure to deal with.” It is very satisfying to have been able to provide this level of service to a major infrastructure project, and to have contributed to providing a focal-point for the quake-ravaged eastern suburbs.